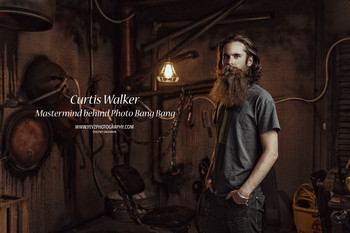 Curtis Joe Walker is a Las Vegas original, just like his studio, Photo Bang Bang. Starting out in front of the camera in college, he discovered a love and appreciation for both sides of the lens as an actor, model and photographer. After obtaining his degree in commercial photography in 2008, he began working with a local real estate developer to capture photos of new neighborhoods. Around this same time, he stretched out into photojournalism with the legendary car blog, Jalopnik.com and the SEMA car show.

In addition to Jalopnik, he has shot and written articles for Gizmodo, Urb Magazine, Hustler Magazine, Vogue Italia, io9, Dvice, Mashable, Wired, DeviantNation, SuicideGirls, Las Vegas Weekly, Las Vegas City Life, Kink.com, Sexual Health Magazine and more. He is a highly competent photographer with a skilled approach to composition and lighting who loves working on location and in new environments, in addition to the comfort of his studio.

His current lineup of cameras includes a Nikon Z6, Lomography Instant Wide, Lomography Diana+ Instant Square, Insta360 OneX, and iPhone8 and he is now branching out into live streaming and filmmaking.